A court in Myanmar has sentenced Aung San Suu Kyi, the deposed civilian leader, to four years in prison on charges of incitement and violating Covid-19 rules, the first verdict against her since the military seized power in February.

Suu Kyi, 76, served as Myanmar’s state counselor and de facto leader until she was detained by the military 10 months ago and charged with nearly a dozen charges carrying maximum sentences of more than 100 years.

They include accusations of corruption (each carrying a possible penalty of 15 years in jail), instigation, unlawfully importing and possessing walkie talkies, and breaching the colonial-era Official Secrets Act (each carrying a maximum sentence of 14 years in prison).

She has denied all claims, and her supporters claim the charges are politically motivated.
Suu Kyi was sentenced to two years in jail by the Zabuthiri Court in the capital Naypyidaw on Monday after being found guilty of inciting and two years for breaking section 25 of the Disaster Management Law, according to sources close to the trial.

Win Myint, Myanmar’s ousted president, was also given a four-year term.
It’s unclear where their penalties will be carried out.

Myanmar’s military dictatorship has attempted to keep information about the trials under wraps. Her legal team was placed under a gag order in October, preventing them from speaking with the media.

he verdict comes a day after security forces cracked down on a protest in the country’s biggest city Yangon on Sunday, prompting condemnations from the United Nations and the United States.
At least five people were killed when a vehicle plowed into anti-junta protesters, news outlet Myanmar Now reported Sunday, citing protesters and eyewitnesses. One reporter who witnessed the incident told CNN that it was a military vehicle that rammed demonstrators. 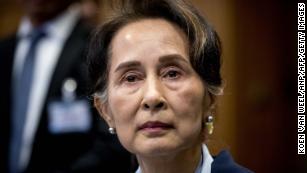 Eleven protesters were also arrested at the scene of the incident, including two men and one woman who were injured, according to a statement by Myanmar’s military. However, the statement did not acknowledge the reported deaths or the alleged vehicle attack.

he United Nations in Myanmar condemned the incident slamming the “reported attack on a number of unarmed civilians in Kyimyindaing Township, Yangon, in which a vehicle belonging to security forces rammed into protesters who were then fired upon with live ammunition leading to deaths and injuries to numerous people.”

The US Embassy said it was “horrified by reports that security forces opened fire against, ran over, and killed several peaceful protesters.”

View all posts by admin →