Vice President Yemi Osinbajo has arrived in Kaduna State to offer his support and to pay tribute to the victims of the terrorist attack on an Abuja-Kaduna passenger train attack on Monday evening.

According to his spokesman, Laolu Akande, Osinbajo, who was already on his way to Lagos for the 13th colloquium commemorating the 70th birthday of All Progressives Congress stalwart, Asiwaju Bola Ahmed Tinubu, took a detour to Kaduna on Tuesday afternoon after receiving the disturbing report of the terrorist attack. 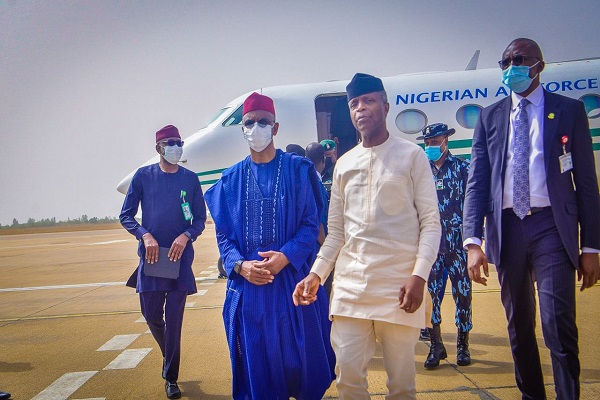 “On his way to Lagos for the 13th Tinubu Colloquium marking former Lagos State Gov’s 70th birthday, VP had to detour to Kaduna this afternoon on hearing the extent of human & material losses occasioned by yesterday’s dastardly attack on the Abuja-Kaduna railway route,” Akande tweeted.

He is scheduled to pay visits to victims of the attacks at the 44 Nigerian Army Reference Hospital and Saint Gerald’s Catholic Hospital in Kaduna, the state capital.